Review: A Promise of Fire by Amanda Bouchet 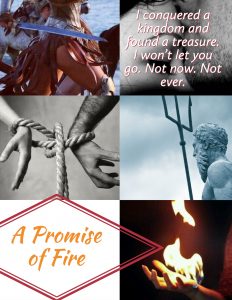 A Promise of Fire is the first book in Amanda Bouchet's Kingmaker Chronicles. It's fantasy! It's romance! It's Greek Mythology! It's a bad-ass, disaster heroine! It's amazing and you need to read this book!

The third book in this series, Heart on Fire, just released on January 2 so I though it was a great time to sit down and write about all my feels for this book. Because I have a lot of them! Promise of Fire is just a great mix of amazing. Now, this book leans more toward romance than fantasy but Bouchet shifts that balance in the second book, Breath of Fire. There is certainly more world building and exploration of the mythos surrounding the world in book two than there was in book one. But I'm not talking about book two. I'm talking about book one.

Catalia "Cat" Fisa lives disguised as a soothsayer in a traveling circus. She is perfectly content avoiding the danger and destiny the Gods-and her homicidal mother-have saddled her with. That is, until Griffin, an ambitious warlord from the magic-deprived south, fixes her with his steely gaze and upsets her illusion of safety forever.

Griffin knows Cat is the Kingmaker, the woman who divines the truth through lies. He wants her as a powerful weapon for his newly conquered realm-until he realizes he wants her for much more than her magic. Cat fights him at every turn, but Griffin's fairness, loyalty, and smoldering advances make him increasingly hard to resist and leave her wondering if life really does have to be short, and lived alone.

This is one of those books that I devoured as fast as I could and then immediately started rereading once I finished. I didn't want it to end. I wanted to stay in the world wanted and pick up on new nuances and discover more of about…everything! This book was so deliciously well done I wanted to stay with it and the characters long after I finished!

There is a lot about this Promise of Fire that I like. From the character to world building, Bouchet has created a believable world full of complex characters, political systems, and magic all while steeped in the meddling of the gods. There is so much that I could unpack from this book but I don't want to provide you with a five page essay. Instead I'm going to give you the quick notes version.

Now it isn't just the fantasy element that I love. The romance is a thing of beauty itself.

Cat and Griffin, at the start, are a little like oil and water. Not only does Cat trust Griffin as than she can throw him (she can't. She can't throw him.) but they have two different goals at the start of the book. Cat wants to stay safe and hidden. Griffin wants her help establishing his family's new rule in Sinta. So he takes matter into his own hands and brings cat with him kicking and screaming and throwing punches.

And somewhere between the verbal barbs, Griffin starts falling for her.

And he tries so hard to win her over! So hard!! Now, I'm not talking bring her flowers or anything, that's not this story. But he wants her trust and to protect her. She doesn't know what to do with that. With her upbringing and what she's running from, letting people get close to her isn't an easy thing for her to do. Affection is a foreign concept. It's kind of nice to have this role reversal. Most times, it's the guy who is walking around emotionally constipated, but that is Cat in this story.

There are wonderful moments where it is blatantly obvious to everyone except Cat that Griffin has feelings for her and she's more or less baffled by his actions. And yet as the story progresses Cat also has the sinking realization that she's starting to feel things for Griffin as well. And she freaks out. She doesn't feel safe forming any romantic attachments, that's been used against her in her past. Plus, she doesn't like Beta Sinta, he's big and smelly!

The tension between desire and confusion is palpable throughout the story. It might as well be another character in and of itself.

And this is part of where I swoon a little a lot for Griffin. He recognizes Cats fear, he doesn't understand it fully, but he realizes this tension, fear, and confusion are all things Cat needs assurance about before anything is going to happen. He works to reassure her and help find ways to alleviate those concerns for her! Now, granted, he might do it in his own stubborn way, but he wants to find a solution to make her feel secure in their relationship. *Gasp. Swoon*. I love heroes who do this! Those who put his lovers concerns first before the sex! Just all the swoony feels, Batman!

Once they do get together, it's all passion and fire.

I cannot reiterate enough how much you need to read this book! The second one is equally full of feels and Bouchet doesn't pull her punches. I'm so anxious to dive into the third book and see how she continues this story. Go buy them! Go get them from you library. Borrow them from a friend. Just read these books!!

Also, if you don't have time to read this, the audible narration is superb!

He's [Cerberus] Hade's pet, so I doubt the heat bothers him. I toss him a wave, and two of his three upper lips curl in a snarl of acknowledgment. One of these days, I'll get all three, although in eight years I never have. I think his middle head just doesn't like me.

His gray eyes are stormy, and a tremor runs through me. It isn't fear, and it make me want to squirm. “ Conquered a kingdom and found a treasure.” His voice turns gravelly, low. “I won't let you go. Not now. Not ever.”

“You don't get it.” He sets me back enough to look me in the eyes. “You're mine. Not Cat the Soothsayer. Not Cat the Kingmaker. Just Cat.”

“I love you, Cat. I would do anything to keep you safe. That is my binding vow."

No one has ever been careful with me before. I don't need careful, but something inside me still cracks, a fissure created by this earthquake of a man.