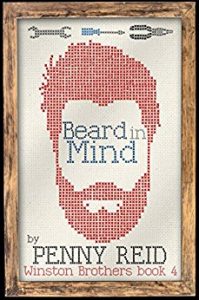 First and foremost, I need to start off with saying: I love Penny Reid. I am convinced that she can do no wrong. She is also the author that brought me back to the Romance world (thank you a million). My first introduction to her was with the book Truth or Beard. And I'm not going to lie; I 100% bought the book because of the beard (oh, and well, the synopsis sounded pretty damn good as well). You see, my husband has a magnificent beard and I am a sucker for full bearded heroes. Color me happy when I found Penny Reid and her menagerie of bearded men. Praise the Lord!

One of my favorite things about Reid is that her books are always a surprise. You never quite know what you're going to get from them. While, yes, you have your “typical” boy meets girl and they eventually fall in love, the “how” they fall in love is always so unique. So different. So smart. And I love that. I love that Penny Reid presents these scenarios that make the reader think and ponder about what they just read. As she says, these are smart romances.

Beard In Mind lives up to the full Penny Reid potential. It was unique. It was heartwarming. It was wonderful. I am now also fully convinced that all of her books should be sold with a package of tissues.

Beard In Mind is the story of Beau Winston (twin brother to Duane Winston, grumpy hero of Truth or Beard) and Shelly Sullivan (sister to Quinn Sullivan, hero of Neanderthal Seeks Human and Neanderthal Marries Human). Both characters have been introduced before throughout the books, they're familiar and characters I've been wanting to get to know better. And Penny delivered. Boy howdy did she deliver!

I never would have thought of these two as a match until Penny sneakily brought them together in Beard Science. But once that was set up, I couldn't wait to get my hands on their story. At first glance, these two people seem as opposite as night and day. Beau is described as, “the nicest, most accommodating guy in the world…Handsome as the devil and twice as charismatic.” And Shelly? Well, Shelly is not nice. She's blunt, rude, and a, “stunning human-porcupine hybrid.” At first glance, these two don't seem to make sense, but as the old adage goes, “opposites attract.”

Because, here's the thing, Shelly is clinically diagnosed with OCD.

It is because of her OCD that Shelly acts like a human-porcupine hybrid. It is how she has learned to cope. So this is where you should start pulling out your box of tissues. Because the first chapter from Shelly's perspective is so damn heartbreaking. Shelly views herself as a broken thing that needs to be fixed in order to function.

While Shelly has OCD, Beau has his own set of troubles. And just as Shelly has to learn to trust someone else, so does Beau. And they find that trust in each other. But more importantly, they learn to support each other throughout their own individual hurdles. It isn't about fixing each other. It is about supporting each other.

“All people are broken, Shelly. No one is perfect. Some seek help. Some don't. But no one is ever fixed by another person. We can only work on ourselves… You can be supportive of Beau, hold the tools for him while he works on his refrigerator, remind him to take a break, show interest in his struggles. You can do things, gestures of kindness that show him he's appreciated, that you care about him. But no on can fix Beau's refrigerator except Beau.”

I cannot tell you enough how much I love and appreciate this. I have read too many romance stories with the magic penis/vagina where the hero/heroine is cured/fixed/suddenly whole by the amazing power of love and the magic penis/vagina. And I cannot applaud Penny enough for making this statement. Your problems aren't fixed by someone else. They are fixed by working on them yourself.

And this backdrop serves to highlight the wonderful characters that are Beau and Shelly. From previous books, Beau is presented as the charismatic, fun-loving Winston brother. He's affable and easy going. And, in some ways, he's easily lost in the background of his other Brothers. The other Winston brothers have been highlighted in some way, shape or form, with Penny dropping hints about their backstories. She hasn't really done that with Beau. And to see the depths of his character come to the foreground is a beautiful thing. More is learned about who he is as a person and his own internal struggles. Pair that with the fact that his twin, his best friend, is leaving, and there is a sense of longing that surrounds him.

He is a character that feels strongly and it is that which, I think, draws him to Shelly. As Beau starts to peel back the layers that are Shelly, she becomes irresistible to him. He can't escape her, and eventually, he doesn't want to.

“But I love you and I need to know whether you're staying or going. Whether we're in this together, for the long haul, or if you're planning to move back north, closer to your family. And if that's the case, I want to go with you. I can't think past losing you. I can't focus on anything else. Where you are, that's where I want to be.”

And Shelly…oh my goodness, Shelly…Shelly is such a beautifully written character. I feel like Penny Reid did a wonderful job portraying someone clinically diagnosed with OCD and presenting her daily struggles. It was so moving to see Shelly go from struggling with her disorder to her acceptance of it (more or less. As I said before, she isn't cured by the end of the story). To see the role that Beau played in that story. It was gorgeous.

“And I felt the kiss she placed on my neck just before she whispered, “I just realized something.” “What?” “I don't want to be perfect.” I grinned, smoothing my hand down her back and placing a kiss on her temple. “Good. 'Cause perfect is boring.”

But Reid, being the wonderful storyteller she is, portrays Shelly as someone more than just her OCD. She has her own quiet strength, loves fiercely, and is stubbornly determined. She is such a unique character and I was enthralled with the way Reid brought her to life.

What Could Have Been Better?

I really have one minor complaint with this book and it has nothing to do with the storyline or character development. Sure, there were a few times I wanted to smack Beau upside the head, but it really only added to the story.

I wanted a scene with Shelly and Jennifer and Ashley making soap! I was so disappointed that didn't happen! Reid sets up such a wonderful interaction in both Beard Science and Beard In Mind (these books happen simultaneously) between Jennifer and Shelly and the connection they have all because Jennifer suggests they make soap in her super sterilized kitchen! I would love to read more about the Winston brother's women bonding! Part of the reason I love Reid's Knitting In the City books so much is because of the tight knit (see what I did there??) friendship between those ladies! I frankly want more of that for the women in Green Valley.

So, dear Penny Reid, if you somehow happen read this (that would be amazing!), please, I beg you, a novella, a short story, a little something about these women making soap! These women are amazing and I would love to read more about them in the future!