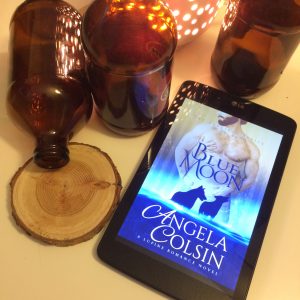 When betrayed by his Alpha, Cade Hodgins takes the role in leading the Arkin City pack and begins his search for those responsible for his father's death. Information is hard to come by however—until a stray lupine wanders into his territory.

But Ashley Passmore is no ordinary stray. She's a newborn wolf, turned from being a human with no prior knowledge that lupines existed. Due to her blackouts, she can't recall who turned her or why, but Cade suspects her attackers may be the same as those who entrapped his father.

In the meantime, Cade takes Ashley in to help her regain control of her new life, and finds more than just a lead—she's his mate. But Ashley is adjusting to the new world she's been thrust into, making it uncertain she'll accept the growing bond between them, while those who turned her want to make sure she's silenced for good.

I decided to put in a warning prior to my post today. This book, and subsequent post, deals with both consent and life after a traumatic event. This isn't about rape, though some of the events in the book might as well be a thin veil for talking about it. As I'll repeat in the post, considering the climate, the #metoo movement, and the stories women share, I want to make sure you as a reader are prepared for this. There is nothing graphic shared in this post, however, knowing that the hint of this conversation can be upsetting to some, I wanted to put this warning out there.

You know those assholes who like to shit on the romance genre as a whole? The people who say that romance is nothing more than trash, is all about sex, isn't smart, isn't edifying, isn't up to their perfect pseudo-intellectual standards? You know those assholes. Those asshole are wrong! And have probably never picked up a romance book in their life (Mini rant never over).

And the reason I know they're wrong is because of the numerous, edifying, issue-raising books I have read in this genre. Take exhibit A and the book I'll be reviewing today: Blue Moon by Angela Colsin.

I reviewed another of Colsin's books, Strange Brew, back in September and I loved it. Blue Moon is equally fantastic. All her books have held up pretty damn well. While I loved the 5th one, The Final Calling, the best, I'm reviewing the first on for two reasons: 1. I was given a copy of this book by the author to review, but 2. And maybe more importantly, this book deals with consent and life after trauma. In this climate, with the #metoo movement and the unending stories of women experiencing sexual assault, I felt it was important to review this book. There was a moment I thought about reaching out to Colsin to see if she'd be alright with me reviewing The Final Calling instead. However, this blog isn't just to highlight books I love, but to highlight books that have important things to say. I think Blue Moon has some important things to say.

Here's a little book-backstory for you. Cade Hodgins is a Lupin. This is different than a werewolf, which I won't get into because it's irrelevant to this review and Colsin tells you all about it at the start of the book. He's the Alpha (leader) of his pack and is hunting for the bastard Lupins who killed his father. Dad Hodgins discover these jackasses were running an illegal and highly dangerous gambling ring based on pitting newly turned Lupins against each other. Which, in this world is a HUGE NO! Not only are they running these fights, it also turns out they're turning people without their express permission. Again, a HUGE NO in this world. Which brings us to Ashley.

Ashley becomes the unwitting victim of these Lupins. Her world is turned upside-down, she's scared, she doesn't know what's happening, and has no idea that the supernatural world exists. She's halfway convinced she's going insane. When she meets Cade, she's vulnerable and, more than anything, wants someone to explain what the hell is going on.

So the fact that she is taken in and cared for by Cade and his pack is so important to Ashley's arc. Everyone in Cade's pack who heard about Ashely being turned against her will were angry…downright murderous, even. Ashely is believed. She isn't told she's wrong or her being turned was her fault. In fact, she's told this:

“Don't go on a guilt trip, Ash. You're not a bad person, you were victimized. Nothing that happened was your fault.”

Do you know how many women need to hear this? Need to hear that it wasn't their fault. That what happened to them wasn't because of something they did? Probably every single woman. I love this. And this is the part of the book I think is so important. The people who surround Ashley are caring and nurturing. She quickly finds a family within this pack and who will fight for her and teach her how to fight as well. Colsin does an amazing job of balancing Ashley's recovery and giving her a lodestone to turn to when things are starting to overwhelm her. I wish more people had this! Everyone needs a pack.

I just…I have a lot of feels about this.

I could repeat a lot of what I wrote in my review of Strange Brew. All of Colsin's books are about supernaturals finding their fated mates. Yet I never find Colsin's version of this trope creepy (which is how I feel about other books with of the same idea). In the Crucible series, the couples never ignore each other's wants, needs, and fears. They talk with each other about what it means to be mates and bonded. What that means for their lives and futures and what changes that might entail. I love Colsin's version of the mates trop for this reason. They talk it through with each other, rather than just assume that, because they're mates, they're automatically going to fall in love and have their happily ever after.

Cade treats Ashley no differently. And this is why I love Cade Hodgins.

Cade doesn't want to overwhelm Ashley more than she already has been. He helps gently ease her into the Lupin life-style, respecting her needs and boundaries. He's a gentleman. And Cade is ever the conscientious man in love. He recognizes that he's bonding with Ashley pretty quickly, however because he's very aware of what she went through, the trauma she's faced, and the repercussions of that, he's hesitant to start anything romantic with her. He more or less waits until she is ready before starting anything. Which is both infuriating and adorable. He's a swoon-worthy guy who puts his woman first before his pants feels.

His first instinct is to protect her while, on the other hand, he wants to know if she is bonding with him as well. There are these wonderful moment between the two of them, longing glances, gentle touches, and extreme frustration that nothing more is happening. It's fantastic! Cade knows what's happening, yet he's trying to put distance between himself and Ashley. Ashley doesn't know what's happening, thinks Cade is frustrated, and starts ignoring him. All the while, they're both jealous as hell of anyone else talking to the other. It's a very amusing circle of, “I want to. But I can't. But I want to!”

While Cade is a wonderful character, Ashley is a spitfire in her own right. Even though she experienced something traumatic, she never gives up. She finds a life for herself in this new world. And where she describes herself as timid before, she shows no compunction for standing up for herself and speaking her mind now. She's still the compassionate person she was, but she's also not going to let anyone walk over her. She's going to fight for what she wants and the people she loves. And more importantly, she's going to fight for herself. She's amazing and I love her and I want to be her friend.

I love the romance between these two. It's respectful, adorable, and gives me the warm-fuzzies.

I love that Blue Moon is not only blatant about the necessity of consent, but also that Ashley has a group of people surrounding and supporting her as she starts her new life. This is why romance is important. Because issues like consent need to be talked about. It should be talked about. I am so glad this book exists for that reason.

If you want to start a new series, grab the Crucible and start with Blue Moon. The characters are wonderful and all the stories intertwine (though can be read as stand-alone books if you want). This is a great paranormal romance series with so much heart!

"You need to be kissed more often."

"I feel like I've been waiting for you all my life."