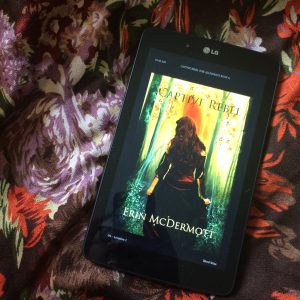 I was contacted by the author to write an honest review.

Captive Rebel is the story of two warring nations, a spy, a prince, and their growing love for each other. Set in a dystopian society, the Greek gods have played with the fates and fortunes of humankind. In a dying, overpopulated earth, the two gods Zeus and Poseidon, favoring those who are faithful, have aided them in their fight against the unfaithful. These faithful are the Allegiant. With the help from these gods, the unfaithful are decimated, the survivors forced to flee to the hills and forest, aided by the god of the underworld, Hades. These are the Rebels.

The story opens with our protagonist, Rebel spy, Marylyn O'Conner, undercover as a servant girl in the Allegiant palace She, along with two other spies, Ian Ramos and Charles Burket, have discovered that the long-captured Allegiant prince, Ariston, has been rescued and is returning to the palace. Their time is up and they must escape back to Rebel lands. During the escape, Marylyn is captured, by none other than the prince himself.

While under his captive care, Marylyn realizes Price Ariston is not the horrible monster the Rebels have painted him to be. And what starts out as hostile irritation slowly turns into admiration and then love between the Prince and the Spy.

One thing that I enjoyed about this book is that Marylyn wasn't the typical burdens-of-the-world-thrust-on-her-shoulders, must-save-all-the-things heroine. Her main agenda is to complete this mission and be reunited with her parents (which is part of the story I'll let you discover for yourself). This easily could have turned into another invincible-savior-heroine, but didn't. And I appreciated that change of pace. A lot of the YA books I pick up anymore do use that trope and it feels overused. I like that Captive Rebel didn't follow that formula. Marylyn has been trained to fight, which is evident and well used, but there is no savior complex. She felt a lot more human to me than other YA heroines.

The other part of this story I appreciated was that there was no clear “good guy vs. bad guy.” As the story progressed, I didn't find myself rooting solely for the Rebels nor did my sympathies switch to the Allegiant. There were clearly “bad guys” in both Rebel and Allegiant camps with neither side absolved of atrocities committed against each other. There are also people on both sides who desire for the war end and to build a peaceful world. The main troupe of characters in this book are fighting towards this common goal, no matter what side they're on. The idea that “we must work together” worked for this story.

This book was enjoyable, and I found the above mentioned to be refreshing changes from the normal YA heroines – I'm looking at you Katniss Everdeen and Beatrice Prior (not to say that I didn't like THOSE books, but the similarities between the two are vast). I realize that I'm 30 years old, these books are written for teenagers, and my age is coloring this review, but I wanted a little bit more. This book has a lot of potential. The premise of the story and the world that McDermott has created is interesting.

What do I mean by this? I mentioned the world this story is set in. As I said above, this book is a dystopia society based in Greek religion, torn apart by way, and potentially set in a war-torn United States. However, that's all we know. And I'm only guessing they're in the good old U.S. of A. because Marylyn wears a Statue of Liberty necklace. However, there is nothing else mentioned about ANY of this world. I love world building and this world has so much potential that isn't explored. Maybe it doesn't need to be, the romance is the key focus in this book, but I would have loved some more exposition about the world this series is built in.

The other part of this story I would have loved to be explored more is the romance. This is kind of an insta-attraction story and I honestly would have loved if Marylyn and Ariston spent a bit more time getting to know each other. McDermott could have given these two history outside of the main plot line (i.e. interactions with each other while both in Rebel territory) to give their romance some more substance. While we saw that Ariston wasn't out for vengeance, I wanted to get to know his character more. I wanted more from these two lovers, which the pacing of the story didn't really allow for.

Now, this is a really quick read (it took me about 2 hours to read this book, if that), so the romance that she builds between these two does work, for the most part, given everything that happens in this story. But I wouldn't have minded one bit if there was more development to the story as a whole. Don't take these criticisms to mean I didn't like the book. I found it enjoyable. The writing was well done, and the supporting characters were also enjoyable (I especially liked Orion). Like I said, this book, and the series, has a lot of potential, I just want more.

This has a sweet romance, a capable and intelligent heroine, a compassionate prince, and a larger, multi-series plot. If you want a quick read with hints of Greek mythology, grab this book. I think you'll enjoy it.

Destined to be enemies, bound by fate...

Prince Ariston rules over the Allegiant - an elite faction favored by the Greek Gods. Separated from his family at a young age, he became a prisoner to the rebellion.

Marylyn O'Conner is a rebel, forced to do the rebellion's bidding until an unforgiving family debt is paid. A pawn in the war for rebels to gain their freedom, she is obligated to become a spy, or her family will suffer.

Driven by revenge after returning from captivity, Prince Ariston makes it his mission to hunt down rebel spies, capturing Marylyn O'Conner in the process.

Desperate, Marylyn knows she needs to escape her alluring captor, or risk the safety of her family.