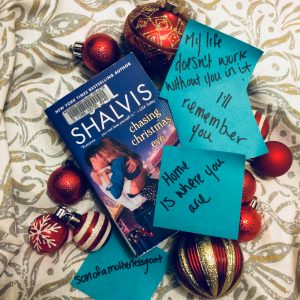 What is it about Christmas that is so magical? More than any other season, I feel like this time of year always holds a sense of romance and wonder. Why is that? Is there actual fairy dust in the air? Is this really when Cupid comes out to shoot his bolts of love? I'm not sure what it is, but I've always felt that the holidays hold some sense of wonder that is entirely alluring.

And I am so thankful to the romance writers who so fantastically capture this romantic magic in the pages of their books.

Jill Shalvis being one of them.

Just as last week's book was my first Mary Balogh, this week, Chasing Christmas Eve, was my first Jill Shalvis book. And it was a great introduction to her works. Chasing Christmas Eve is such a wonderful example of Christmas magic. This is Shalvis' latest full-length novel in her Heartbreaker Bay series and it was absolutely wonderful. Set in the bustling city of San Francisco, the book returns to a group of friends, more like family, who have made a home in the historic district of Cow Hollow.

After running away from her life and responsibilities in New York City, young adult author, Colbie Albright, finds herself right in the center of Cow Hollow searching for a legendary fountain said to help people find true love…into which she takes an unexpected swim thanks to an over exuberant dog. She's fished out by San Francisco's fourth most eligible bachelor and tech genius, Spencer Baldwin, who, for his own reasons, has been avoiding that fountain like the plague. They're smitten at first sight.

This is one way to be welcomed to a new city.

And what starts as some initial flirting leads to a fast and passionate fling. Colbie comes with a time limit. Spence has sworn off committed relationships. They both have responsibilities that come with a deadline and the more time they spend with each other, the less time they work on their projects. They don't see where the other can fit in their lives permanently. And this is, of course, the hurdle they must climb over.

Since they have such limited time together, the relationship between Spence and Colbie is fast and furious (ride or die! (RIP Paul Walker) (Fast & The Furious movies are a guilty pleasure.)). And while they say they aren't going to get serious, while they say they this isn't going to last, the more time they spend together, the more they fall in love.

One thing I liked about their relationship was that they didn't try to fix each other's problems. Yes, they both are focused on something important, yet they give each other the space needed to work on it, albeit, in Colbie's case, after realizing Spence wasn't being quite as honest with her about the scope of his project. I know this might seem like an odd thing to appreciate about their relationship, but it reminded me so much of my relationship with my husband. So many romance stories focus on how much time a couple spends together, they're constantly wrapped up in each other both in time and space. And I get it, I do. In the beginning, that's ALL you want to do. Yet, I have found that I need those moments alone so I can work on my own stuff. That's the same with my husband. We've been married for almost five years now, and most of our evenings are spent half together, half working on our own projects. That's why I liked this part of Colbie and Spence's relationship so much. I understand the need to be apart from someone to work on necessary things…even when I want to be with my person.

I love how easily these two learned to trust and lean on each other when needed. While yes, it was a fiery affair, I loved the quiet moments between them even more. The moments they took to lean on each other, literally and figuratively, up on the roof, taking a moment for themselves and supporting each other. It was simple and beautiful.

I loved the rest of the Heartbreaker Bay cast because of their supportive friendship. They got in each other's business because they care deeply for Spence. They want to see him happy. And when they see that Colbie makes Spence happy, they make sure to embrace her (with a few mishaps on the way). This is a goofy bunch and I can't wait to get my hands on their stories.

Chasing Christmas Eve was such a wonderful Christmas read. The romance, the characters, and the story all make this book magical. Go read it. And if you're a stickler for reading in order, I'm going to hazard a guess that all the other Heartbreaker Bay books are equally as wonderful as this on is. It'll fill that need for Christmas romance.

And God, when she looked at him like that, he was a goner. She'd offered him her friendship. Her body. And he'd taken both.

"I'm not trying to play fair. I'm playing for keeps."

"My life doesn't work without you in it."

"I determined on day one that I was never going to get tired of you."

Run for the hills—temporarily. That's Colbie Albright's plan when she flees New York for San Francisco. Wrangling her crazy family by day and writing a bestselling YA fantasy series by night has taken its toll. In short, Colbie's so over it that she's under it. She's also under the waters of a historic San Francisco fountain within an hour of arrival. Fortunately, the guy who fishes Colbie out has her looking forward to Christmas among strangers. But she's pretty sure Spencer Baldwin won't be a stranger for long.

Spence's commitment to hiding from the Ghosts of Relationships Past means he doesn't have to worry about the powerful—okay, crazy hot—chemistry he's got with Colbie. Just because she can laugh at anything, especially herself... just because she's gorgeous and a great listener…just because she “gets” Spence immediately doesn't mean he won't be able to let Colbie go. Does it?

…and hope for a miracle.