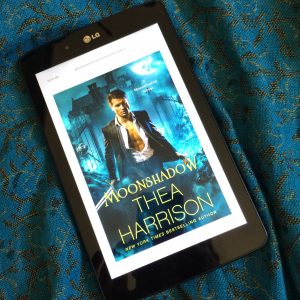 You guys! I was not ready for this book! It was like my own personal brand of catnip! It just hit all the points, left and right! I loved it! Where did it come from? And more importantly, why am I just now discovering Thea Harrison!?

I'm honestly not sure where to start right now. I spent my whole day reading this book! I was so engrossed in the story and the characters that, literally, no, I did not want to put it down! I wanted to start reading Moonshadow all over again as soon as I was done.

Thank god that she has a whole other series and the second book in this series is already out! Thea Harrison's books are going to keep me entertained for a long time.

So, where do I start? Maybe I should list what elements of the book were catnip to me. That might be shorter than actually discussing the whole book.

Alright, let's get some of the basics out of the way. Moonshadow is the first book in Harrison's new series, aptly titled Moonshadow. It further explores her Elder Race universe, a place where magic is a normal thing and the Elder Races (Wyrkind, Elves, Fae, witches, and more) interact with humans on the daily. Due to the magical forces of nature, there are “dimensional pockets of Other lands where magic has pooled, time moves differently, modern combustible technologies don't work, and the sun shines with a different light.” Home-girl has a whole section on her website further detailing this universe she's created, including histories for all the other magical races. I may have spent several more hours exploring this after I was finished reading Moonshadow. Check it out.

If you're familiar with her other books, or if you've looked her up online, you'll notice her first series is in fact called The Elder Races. While Moonshadow is still part of this universe, the main difference is that the book and series is (so far, there are only 2 books in this series) centered on the conflict between the Dark and Light Fae whose territory is mainly in the U.K. These machinations between the Dark and Light Fae are the background narrative for Moonshadow.

Our tall, dark, and dangerous hero of Moonshadow, Nikolas, is a Dark Knight of the Dark Court. He has been stranded on Earth for years (we're talking centuries, here) along with his diminishing band of brothers. Their sole focus has been to get back to their lands and survive being hunted by the hounds of the Light court. They're stuck and running out of time and options.

This is where Sophie comes in. Sophie is a witch consultant for the LAPD on leave as she recovers from a gunshot wound. She's healing both physically and emotionally. Due to a series of events and background exposition, Sophie is approached with an unusual opportunity: unlock a magically sealed mansion and the house and grounds are hers. With vacation time in hand, Sophie decides to try opening it up. The Mansion just happens to be in the U.K. Which just happens to be built on one of the closed off access points to the Dark Court. Which just happens to be where Nikolas is lurking about.

Now, this wouldn't be a romance if these two didn't meet. And meet they do through a series of odd events and malfunctioning technology. When they meet, it isn't cute. It's explosive and there is little trust on both sides, both of them too guarded by past events. Nikolas quickly sees Sophie as a means to an end and getting home. Sophie “allows” Nikolas to stick around because strange things keep happening and Nikolas proves to be useful in a fight. They are suddenly in constant proximity to each other working on a common goal to achieve both their individual missions.

Now, I would be remiss if I failed to mention two key characters: the lost denizen of the Dark Court and Puck, Robin and fellow brother in arms, Dark Knight Gawain. In part, these two characters are equally important to the story as Nikolas and Sophie are. In many ways, Robin is the catalyst for this story, using magic of his own to find Sophie. And when Sophie takes responsibility for the Puck, she will not abandon him to either Gawain or Nikolas. Gawain plays, in some part, the opposite of Nikolas. I wouldn't call him a ray of sunshine, but he isn't as battle-hardened as Nikolas is making him the easier-to-trust of the two at first meeting (at least for Sophie).

Part of what made this book catnip for me was their relationship. I don't know why, but I have a huge weakness for enemies-to-lovers tropes. The “enemies” status doesn't stay there for too long (this book only spans a few days), but they do start out pretty antagonistic towards each other. And while that quickly changes, their own personalities get the better of them as well.

Nikolas is an old-timey, commanding, focused, not-sure-what-to-do-with-his-feelings type of guy. He is used to people following his orders and Sophie doesn't. She maddens him. He has been fighting a war for too long and doesn't believe he has room in his life for any relationship. He's been hardened by battle, yet Sophie helps break down that wall.

Sophie is smart, inventive, kicks ass (literally), and compassionate. She always keeps her promises, which is how she's in this situation in the first place. Sophie is just as head-strong as Nikolas. Which is part of what makes their relationship so explosive. When Nikolas commands, she doesn't necessarily listen. If it's a good idea, sure, she'll follow along, but as she keeps reminding him, she is her own woman, she doesn't need someone with antiquated gender roles telling her what to do.

So they tend to have some pretty interesting and hilariously explosive interactions.

…She hooked her fingers through his and gave them a quick squeeze. “Never mind. Thanks for getting the food.” “You're welcome,” he said, frowning. “Lock the door when I leave.” Biting back a sigh, she told him, “I might choose to lock the door when you leave because it's a good idea, not because you ordered me to.” His eyes narrowed. “One of these days you're going to say, 'Sure, Nik. That's a good idea, I think I'm going to do that.'”

But despite their bickering and despite the fact they “don't have time for each other and don't like each other,” they can't deny the attraction to each other. And what started out as a one-time thing turns into love, because despite their flaws, their strengths overshadow them.

Yet, even when they do tell each other “I love you,” Nikolas still doesn't believe he can have Sophie in his life. He's fighting a battle. His life is dangerous. He cannot provide certainty and safety. And that makes him afraid to commit to Sophie.

It just takes a little while - and the wise words from his brothers-in-arms - for Nikolas to realize that what they have can actually last.

“Braden shrugged and wiped his face. “The love has to be bigger than everything else. The isolation, the separation, the danger. When the love is bigger than all that - you just do it. You pay the price in uncertainty and sometimes bereavement, because every moment you're together is worth the cost. If the love is big enough, yet you don't take that chance…man, it doesn't matter what you're fighting for. You've lost.”

In many ways, their relationship is the equivalent of this and I love it:

This does feel like a bit of a spin off series to me and while I wasn't lost or confused in the story, I do think Harrison is writing as though her audience is already familiar with the world she's created. There were moments when I wanted further explanation about the other magical Races she mentions. That is where I felt a little confused having not read the other books, but I figured it out. I also get the feeling that some of the characters may have been brought up in the other series as well. It's a hunch based on reading the synopsis of the books in the Elder Races series. But, again, I didn't feel lost in the narration because of it.

Who knows, maybe I'll change my tune if/when I go back and read the other books.

~She said, “Thank God. The spell didn't recognize you as an enemy.” He gave in to his impulse at last and cupped her chin, stepping close so that he could feel the heat from her body. It was a subtle warmth that touched him in places he didn't understand and had long denied existed. “That's because I'm not your enemy, Sophie.”

~Just don't kiss assholes. One job, Sophie. Only One.

~If he ever chose to look at someone with that same sense of commitment, Sophie knew that woman would never doubt anything about him and would never want for anything.

~She resurrected something inside him, the kind of man he used to be, protective of and attentive to those he cared for. He wanted to shelter her, not because she asked for it or because she even needed it, but because he needed to be the one to give it to her.

Her past is a blank, her future uncertain….

Recovering from a shooting, LAPD witch consultant Sophie Ross leaves her job and travels to the U.K. to search for answers about her childhood. When she encounters a Daoine Sidhe knight of the Dark Court, she becomes entangled in an ancient hatred between two arcane forces.

He has given his body and soul to fight for his people….

Barred from his homeland along with his surviving brother knights, Nikolas Sevigny is embroiled in a conflict that threatens everything he holds dear. Only by uniting his people's resources can they hope to prevail against Isabeau, the deadly Queen of the Light Court. He will do anything and use anyone to return home to Lyonesse.

When Nikolas encounters Sophie, he sees a tool to be used. The insouciant witch might be the key to unlocking every passageway that has been barred to the knights of the Dark Court, even as a fascination for her takes root in what's left of his soul.

Sophie has no intention of becoming anyone's pawn, yet the fierce Nikolas is so compelling, she can't deny the temptation that endangers her guarded heart.

As magic threatens Lyonesse, Queen Isabeau unleashes her merciless Hounds, and Nikolas and Sophie become embroiled in a race for survival. Meanwhile, the passion that ignites between them burns too hot to be denied and quickly turns into obsession.

Thank goodness they both know better than to fall in love…