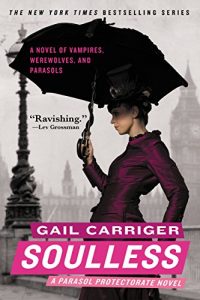 The Synopsis Soulless, half-Italian spinster Alexia has found herself in a bit of a pickle, what with accidentally killing a vampire. And now the irritating (Scottish, handsome, werewolf) Lord Conall Maccon has been sent to investigate.

I love historical fiction. This should come as no surprise. There is something to be said about the dances, the rules of society, the fact that there are dukes EVERYWHERE! (okay, not really in real life, but they just make for such good heroes, similar to billionaire boyfriends in contemporary romances). Let's also not forget the fact that these societal rules = crazy sexual tension because no touchy! Bad touchy!

Now, throw in some supernatural beings in the mix, and you've got yourself a new set of rules to include with Victorian society.

This is what Gail Carriger does with her series, The Parasol Protectorate. One part Victorian society, one part supernatural creatures, and another part steampunk, and you have yourself the setting of a wonderful new world. The fantastic part is, even though it may sound odd, it works! Carriger's world building is just as good as the story she writes. There is never a moment where the rules she's created for this world don't make sense or break. She never has characters giving long-winded expositions about the world or has info-dump paragraphs. Rather, she gradually introduces the world and rules to the reader. In the end, it just makes sense that there are vampires and werewolves and other supernatural beings running around London, England in the 1800s. Because…why not?

Part of the reason why this works is because Carriger introduces a world that is different and yet familiar. Most people are familiar with what a Victorian England looks like. The societal rules are still the same as is the fashion. Also familiar are the rules for vampires and werewolves. Vampires will still burn in the sun, drink blood, and can die due to a wooden stake. Werewolves are still ruled by the moon, change into wolf form, and have a pack protocol. It is familiar, just wrapped up in a new story.

The only caveat to this would be Alexia Tarabotti, our parasol-wielding heroine. She is a new subset of supernatural called, aptly, soulless or preternatural. With one touch, “soullessness always neutralized supernatural abilities.” Alexia can change a fully transformed werewolf or vampire back into human.

So, the world building is thing one I love about Soulless. Thing two, would be the writing itself! Carriger manages to pull off such a wry humor throughout the narration that just makes me laugh (I'll be honest, it's more like a snort-giggle. A sniggle?). As she describes the settings and the characters, she'll often use prose that is unexpected, catching me off guard with her quirky humor. Such as this:

The Loontwills returned from their shopping expedition flushed with success. Except for Squire Loontwill, who was now less flush than he had been and wore an expression more often seen on men returning from battle-one that had been badly lost with many causalities.

I love this. It's cheeky! And it's the type of humor found through the rest of the book.

And the third thing I love about this book: the characters themselves. I'm not going to delve into this too much, because I want you to experience them for yourself. Needless to say, just as Carriger's writing is fun and unique, so are the characters she's written.

The two intrepid lovers of this story are Alexia Tarabotti and Lord Conall Maccon, Earl of Woolsey, who just happens to be Alpha werewolf and Bureau of Unnatural Registry (BUR) supernatural liaison. These two are THE MOST STUBBORN lovers I may have ever read. And I love it.

Alexia and Conall have known each other for several years. This isn't their first time in each other's company. But you do get the sense, due to an incident with a hedgehog, their first meeting got off on the wrong foot, setting the tone for all future interactions. It's not that they dislike each other, per say, it's that they are both opinionated, tenacious, and intelligent leaving them to butt heads against a volley of verbal spars. However, despite their verbal barbs, they genuinely respect each other. Repressing their feelings for each other underneath a battle of wits.

“Lord Akeldama again.” “His advice is sound, and he finds my company restful.” That surprised the werewolf. “Well, I suppose somebody must. How peculiar of him.” Miss Tarabotti, affronted, gathered up her brass parasol and made to leave. Lord Maccon slowed her with a question. “Why are you so curious about this matter? Why do you insist on involving yourself?” “Because someone is dead and it was by my own hand,” she replied, looking gloomy. “Well, by my own parasol,” she amended. Lord Maccon sighed. He figured someday he might win an argument with this extraordinary woman, but clearly today was not that day.

Now, when I say they are stubborn lovers, I mean they are stubborn to the point they ignore their feelings for each other. And (like many other things in this book) it is hilarious. Conall resists because…honestly, I'm going say because he's a man and he doesn't know what to do with his feelings. Alexia because she's a soulless spinster who has been “on the shelf” too long and doesn't believe that anyone would be interested in her for her and she's too practical for that sort of thing.

They are so stubborn, in fact, that Conall's werewolf instincts kick in and compel him to make the first move, much to Alexia's befuddlement, Conall's chagrin, and Lyall's (the pack Beta, second in command) amusement.

Professor Lyall sighed again. “Yes, that. How do I put this delicately? My estimable Alpha has been thinking of you instinctively, I am afraid, not logically. He has been perceiving you as he would an Alpha female werewolf… When he would not admit his interest even to himself, his instincts took over.”

However, once that door has been opened, Conall is all in. He attempts to woo Alexia, first by following pack protocol (a failed attempt) and then second by just kissing all coherent thought from Alexia's head. Which…still has mixed results. Because Alexia, as I've said before, is stubborn and she's not just going to fall over for Lord Maccon and his kisses!

But she does…eventually, because this story is part romance.

This romance is fun to watch go from sparring to wooing to loving. As confident as they are in other areas, watching them both fumble around as they make their affections known is entertaining. It is one aspect of life about which they seem to be completely clueless.

This book, if you haven't guessed, is so much fun! However, it is only part one of five. Soulless, is perhaps, the only book in the series that does not end in a cliffhanger of some sort. But don't let that stop you. The rest of the series is equally as wonderful, introducing new plots and characters that are just as exciting.

Soulless is also available on Audible, in case you don't have time to sit down and read. It is excellently narrated and well worth the listen.

Other Things I liked: