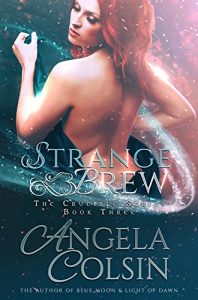 Synopsis Feeling out of touch with her magical gifts, Aislinn Carmichael is a witch seeking a means of restoring her ability to its fullest potential. Despite the warnings of family and friends, the endeavor inevitably drives her to accept the initiation trial of a witch coven called The Trine.

Their test demands the capture of a supernatural creature, a task Aislinn has little doubt she can accomplish with relative ease. But of all the potentially benign creatures she could've snared, none other than a feral werewolf stumbles into her trap. Making matters worse is The Trine's intentions for her dangerous captive, forcing Aislinn to release him and potentially risk retaliation.

But vengeance is the farthest thing from the werewolf's mind.

Troy Ashland is a werewolf standing at death's door, slowly losing his humanity until there's nothing left but savage instincts. It's a process all werewolves face, and the only thing that can appease his restless beast is his mate. So when word arrives from an oracle saying to travel to the Southern US to find her, he's on the next flight out.

After his arrival in Arkin City, the last thing Troy expects is to be caught in a magical trap. But all is forgiven with one glimpse of his temporary jailor, who turns out to be the very woman he was searching for. Still, his efforts of winning her are surprisingly difficult. Not only is Aislinn inexplicably resisting their attraction, but The Trine won't leave well enough alone …

Thoughts One common theme I've found in werewolf-centric books is the idea of a mate. Usually this involves one of the male werewolves finding his poor, unsuspecting mate and marking them so they can live an immortal life happily ever after. This male werewolf is lead by his were-balls like a divining rod (pun intended) to the love of his life and, when they meet, it's like no one has ever existed before this moment. Instant attraction! Love at first sight! The werewolf goes full Alpha Male on this poor unsuspecting woman. He's gonna win her over with his domineering attitude, unexpected and ferocious kisses, and his pheromones (were-omones?)!

Nobody can resist the pheromones.

I've always had a bit of a problem with this trope because nobody really gets a say in the matter. The fates have decided that these two people are going to be together! Who cares what life the woman in this story has had up until now! She's totally okay with suddenly being mated with a tall, dark, and rapey domineering werewolf. What's autonomy???

Maybe I've read some really bad paranormal romance stories in my past.

Which is one of the major reasons Strange Brew was so amazing! The “mates” trope is a crux of the storyline. This is evident from the synopsis and prologue. But what I love about how this trope is used is that the werewolf in question, Troy Ashland, was respectful A.F.! Rather than meeting Aislinn and just running over her wants and needs, pounding his chest in a show of dominance and declaring her his mate, he finds a way to help her discover that information, easing her into the idea. He doesn't want to scare her away. Now, sure, there is an immediate, fiery attraction between the two of them, but multiple times through the story, they repeat the mantra of many new couples, “let's just take it slow.”

This is one of the few stories of this kind (that I've read) where the two lovers actually sit down and talk about what it means to be the mate of a werewolf. Aislinn is admittedly and understandably resistant to the idea that being mated to a werewolf + being marked by a werewolf = turned into a werewolf. She's got her own life! A store to run! Magical power to gain! And Troy respects that. He *gasp* listens!!! They sit down and talk about what being mates means and how werewolves run their pack. Gosh how refreshing, adult conversations about adult topics.

“The only person I could ever turn is my mate, and the prospect has never agreed with me. Any ferine worth his salts doesn't wanna change his woman, he wants her exactly the way she is. So altering you isn't something I'm eager about.”

A major part of this story is that Aislinn is preparing to preform a ritual to help focus her magical powers. Part of this ritual requires her to remain celibate until the night of, in which ritual sex is a key ingredient.

Oh, dancing naked under the moon, that's original. But there's no sacrifices or dismemberment. Where's the fun in that?

The whole scenario between Aislinn asking Troy for help with her ritual is another example of their respect for each other. And I'm not even sure where to start with this because it is a large part of the story and doesn't take place over one or two paragraphs. It spans several chapters. So, I'm going to say, screw it! I'm not going into depth! But this is a great example of their respect for each other, not wanting to push boundaries, but also supporting each other.

It's just refreshing to read about two people trying to figure this out together. I know some romance books thrive on the fact that mis/lack of communication drive the story (and I like some of these books, I'm not shitting on them), but sometimes it's just really refreshing to read a book that doesn't follow this pattern.

So, I guess what I'm saying is that this book was refreshing.

The Romance Now that I've finished waxing poetic about how amazing the respect between these two lovers is, let me talk more about their romance. Cause y'all were waiting for it, weren't you?!

So, confession, I have a major love for male characters that are pretty much all mush on the inside. You know the ones I'm talking about. The heroes who recognize that their partner doesn't need them, but wants them anyway. The heroes who are ridiculously protective even though, again, their lover is more than capable of protecting herself. The heroes who hold their lover when they're in need of comfort. You know…Troy Ashland (also Han Solo, but we're not discussing him.).

I think I have a major crush on this fictional character, guys.

I feel like I keep going on and on about why Troy is a great character. But so is Aislinn. She's a fiery, redhead who doesn't back down, who is powerful in her own right, who is outgoing and smart, who is confident in her own sexuality. She's…kind of a badass.

And man, is it fun to watch/read these two flirt with each other. Cause Troy is trying his hardest to win Aislinn over but because of her ritual, she's resisting and going insane, cause she wants this werewolf in a bad way.

“Well,” she muttered, “it doesn't matter anyway because the sight of you drives me up a wall. Not to feed your ego, but damn it, Troy, I was doing fine up until a week ago.”

What also doesn't help Aislinn is her own mother, Miranda (who is hysterical), who is helping Troy woo her daughter. Poor Aislinn doesn't really stand a chance even if she wanted to.

…He looked own at the folded paper in his hand, opening it to read over the list of three simple steps Miranda had entitled Bewitching the Witch. 1. Roses are adored in all colors and varieties 2. Truffles are a huge weakness 3. Add a dash of charm to their delivery, and reap the rewards.

And once they do get together, their passion is…woah! Like wowza is it hot! Like, mom, for reals, this'll make you blush mad-hard.

Conclusion If you haven't figured it out by now, I really liked this book. It is the third book in the Crucible series and, honestly, the only book in the series I've read. So, it works pretty well as a stand-alone novel. I'm pretty sure some of the characters that we meet are introduced in previous books. I also think, though I'm not sure, that there could be a larger, multi-book plot going on. I could be wrong, and I don't think it affects the readability of this book, but some of the events make me think this could be the case.

Other Things I liked

Sighing dramatically, her mother retorted, “Yup, and to commemorate the fact that you're finally entering into a serious relationship this year, I had the balloons made out of condoms.”

…Grinning, Miranda mentioned sarcastically, “There was a choice of condom balloons, or penis-shaped candles on the cake. Either way, congrats, you're a woman now.”