Review: Wild For You by Daisy Prescott 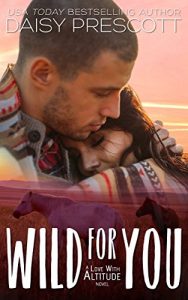 Cowboy fantasies. Oh boy, do I have them. I blame the shiny belt buckles and those chaps.

After getting dumbed by my Not Future Husband, I've decided to spend the supper in Aspen exploring new adventures. First on the list is sexy rodeo champion Justin Garrison, who seems happy to accept the challenge.

What if I fall in love with the real man behind the fantasy? * Being the charming cowboy is an easy role to play. Whenever I'm on the back of a horse or riding a bull, everything's simple, uncomplicated. Running my family's ranch and trying to keep past scandal buried are a lot harder.

When my path crosses with a beautiful brunette at a rodeo, I'm not looking for more complications. Zoe Saragossa's not a typical buckle bunny and I'm definitely not her type.

Can a city girl fall for a real cowboy?

Wild For You is Prescott's third book in the Love With Altitude series. This is a stand-alone romance and while Prescott does bring back other characters, you don't need to know those characters to track with this book.

I've always found Prescott's books to be delightful. They are simple love stories with very little drama. It's refreshing. This isn't to say there isn't some conflict the lovers must overcome, there is, it just isn't over the top and super dramatic. It…makes sense in a real world setting. I think that's what I like so much about Prescott's books. They all read as though they could happen to your or your best friend. They are normal, everyday characters meeting and gradually falling in love.

And that is what happens in Wild For You.

After being dumped by her boyfriend of five years, Zoe decides she needs to live a little and get out of the rut she's stuck in. She needs to figure out who she is again. She needs to experience new things. Maybe experience a new man. But first, eat sad-cake. As much sad-cake as she can get her hands on. Since Zoe's friends wouldn't let her any more eat sad-cake, they drag her to the rodeo. And all her cowboy fantasies come to life. The chaps, the belt buckles, the roping. Lord. Have. Mercy.

Before rodeos, I never thought a man lasting eight seconds could ever be a good thing.

Thank god a real life cowboy falls into her path. All right, it's more like her friends push her into his path. What are friends for, if not that? And Justin likes what he sees. And he's hoping she's interested in more than a fling. It isn't everyday a woman this vivacious stumbles into his path. He might be busy with the rodeo circuit and running his family's ranch, but he'll make time for her. That is…if she is willing to make time for him.

I have a hard time letting people in, but there's something about her smile that makes me want to open the door.

Since this book just came out, I don't want to go into their romance too much and spoil things. Zoe and Justin are adorable together. There is an instant attraction between them, though it takes a while for things to actually get going. At first, they want two different things. Justin is hoping to find a committed partner. Zoe is thinking, “fantasy fling”. When Zoe admits she isn't cut out for one-night hook-ups, she decides to take a chance on this cowboy. And Zoe is utterly charmed by him. He's respectful, fun, makes her feel worthwhile, and is a helluva good kisser. She finds herself falling for him hard and fast.

Justin is admittedly the grumpy-old man of the rodeo circuit. And by “old” we're talking 27 here. He's a serious person who cares deeply for the people under his employ and works hard to make sure they're taken care of. I have a major crush on grumpy heroes. They tend to be the biggest softies with such a big heart for the people they love, especially their women. And this is Justin. He's all smiles and heart-eyes when he's around Zoe. Or thinking of Zoe. Or anything having to do with Zoe, really.

When I see Zoe's name, my grin is bigger than the one I had when I won tonight. Let the rest of the guys spend the night getting shit-faced with the hopes of unmemorable sex.

I have a date with a funny, smart, an undeniably beautiful woman tomorrow night. A little rusty at dating, to be sure, I'm looking forward to spending the evening with her.

Zoe is kind of the complete opposite of Justin. She's vivacious and bubbly. Where he likes camping and roughing it, she's rather stay somewhere that has indoor plumbing. But unlike Justin, Zoe is a bit lost in herself. Her relationship with Neil wasn't the great romance she thought it was. She capitulated to him and forgot who she was. Zoe realizes that she needs to do something for herself. And she decides she needs to make a change in her life.

Somewhere in the last five years, I lost pieces of myself like missing socks. At first I didn't notice, or just assumed they were still around and would show back up eventually.

I've finally accepted I need to do something for me. Reclaim Zoe.

This is a sweet love story. Justin was charming, Zoe was zany, and the rest of the supporting characters were just as great. Prescott's ability to tell simple love stories is absolutely wonderful! I can't wait for her next book

Critique **HERE THERE MAY BE SPOILERS**

I actually feel like the start of this book was too slow. I know there needs to be a set up for both characters, but this one felt like it took a while before things started picking up. They have a few random encounters before they were interacting on the daily. We're talking 14 chapters (out of 29) in before things start to pick up.

The initial conflict between these two added to the slow start. The premise of this book is set up with Zoe looking for a fling to get Neil out of her system. Justin, on the other hand, is looking for a partner. I think Zoe looking for a fling and her reactions to Justin just felt too “crazy” (Her running away when she learns he's a local, not wanting the chance to accidentally run into her “fantasy hookup” in town). And maybe that was the point since she quickly realizes that she's not cut out for a hookup.

The introduction to Justin felt repetitive. The first few chapters we get from his POV are mainly about him not chasing after “buckle bunnies” and how he's not like the other, younger cowboys. It started getting really repetitive and a little frustrating.

Other Things I Loved

In the bedroom, I unlatch the doors on the crates while giving both dogs a little pep talk. “Don't lick his face. Or sniff his crotch. Not trying to hump his leg.” I could give myself the same speech.