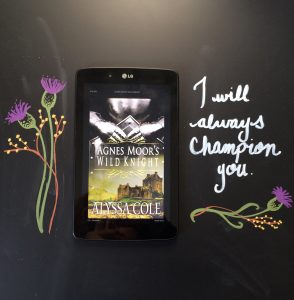 Agnes Moor knows her place in the court of King James IV—as one of the “exotics” in his employ. When the king makes a kiss from Agnes the prize of a tourney, a mysterious knight plows through his opponents to claim it. But it isn't chance. The Wild Knight has come for her, and her champion is after the most elusive prize of all: her heart.

Alright, so, I've had this book in my TBR pile for probably a year! I don't know why I haven't read it before now, but I hadn't and I finally did! And I just…I think I melted a bit when I read it.

First of all, you need to know this is a novella. I did not know this...I probably forgot because It's been a year since I first bought it. But gosh dang-it I want this to be longer! Now, for a novella, it's super cute and a well told story, I was just expecting a full-length novel.

For me, novellas sometimes don't quite hit the mark. The premise is good, the idea is wonderful, but it's just missing something because there isn't a whole lot of room to tell a fully formed story. And I get it. It's a novella. It's short. That's what it is. But sometimes you get some novellas that just really hit the spot and this was one of them. Cole did a fantastic job telling this story.

I was really excited when I found this book because you have Medieval-historic romance with a black woman as the female protagonist. How often do you get that? Like…just this once. This book is it. One book. But I was so excited to read it. Because, let's be honest, I'm guessing most of you think Medieval times and think it's pretty white. And yes, as a white woman, I'm guilty of that. Which is why I was excited for this book. It helps remind me of…you know…reality.

I feel like well-rounded characters aren't often found in novellas. Since the story is so short, the characters aren't as fully developed. However, that's not the case here. Agnes and Gareth were both fantastically, rich characters

Agnes was a wonderful, vibrant character. She was funny and witty and smart. She had wonderful moments of being so graceful while putting down members of the court who impugn her honor. And it was great. I loved reading it! She was smart and graceful, well able to hold her own in court. I so enjoyed her.

Gareth was equally wonderful. He's confident, willing to work for what he wants, and smart. I picture him as Gerard Butler in all the Scottish regalia, which just…give me a piece of that! And when he first meets Agnes, he's enraptured. Gareth is stunned by her beauty and mind. I love a man who loves his woman's brains and much as her beauty. Gareth, in short, is amazing.

One thing I really liked was that Agnes and Gareth weren't strangers to each other. It wasn't a love-at-first-sight-oh-my-gosh-I-gotta-tear-your-clothes-off type romance. They had spent time in each other's company prior to the tournament and there was a genuine respect and attraction for each other. It was the respect between these two characters that I really appreciated about this story.

You have Agnes who is a black woman in a white man's court. She's unique, mysterious, and seen more as an object, not a person. Then there's Gareth, a Scottish highlander who is seen as little more than an uneducated barbarian. These are two people who are seen as outsiders that find and understand each other. They have respect for each other as human and that respect turns into love. When they first meet, they're intrigued by each other, which then leads to some amazing flirtation.

Now let me tell you, Gareth is all in. Gareth is full on ready to woo Agnes the moment he meets. But he waits. She leaves Scotland and she thinks he's forgotten her. But oh no! Not that man! He remembers her and remembers her fondly. Gareth enters the competition for the sole reason to win her hand. He's going to be her champion and then he's gonna marry her. It's fantastic! He's just a swoon-worthy character.

And Agnes, while hesitant, finds Gareth too good to be true. He treats her like a person. He enjoys her conversation and humor and he meets her word for word. Agnes and Gareth are equally matched and it's so wonderful to see. And she also finds a champion in Gareth. Not just as the tourney champion, but as someone who will stand up for her and defend her honor when she cannot. She wasn't expecting to find love, but it found her.

Also, for such a novella, the love scene is surprisingly sexy.

If you want a short, sweet, and sassy romance, grab this book! It is such a treat!

Just once, but it had left an indelible mark on her. She'd thought herself foolish - month of pining away for some Highland chief determined to thwart James's plans for unification - but as MacAllister bowed deeply and strode off the field, she understood that her instinct had been correct: The Wild Knight had come for her. Maybe once had been enough.

“...But I believe it would be quite easy for a man to care for you.”

“I will always champion you,” he said simply. “If you will have me.”

His plaid had flow up when he'd leapt across the table, revealing a muscular ass and the hint of something thick and veined.