Heart of the Fae 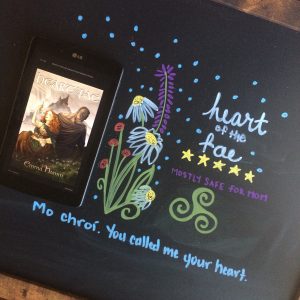 Once upon a time…

A plague sweeps across the emerald hills of Uí Néill, leaving a young midwife's father with months to live. To save her people, Sorcha makes a deal with a dangerous Fae. She must travel across the sea, through merrow and kelpie lands, to find a forgotten king on a crumbling throne.

Born king of the Seelie Fae, Eamonn fought battles unnumbered to uphold honor, duty, and freedom… until his twin brother sank a blade between his shoulders. Crystals grew from the wound, splitting open skin and bone. His people banished him to a cursed isle for his disfigurement, now king of criminals and fools.

With the help of brownies, pixies, and will-o'-the-wisps, Sorcha battles to break through his crystalline shell and persuade him to take back his stolen throne.

This determined beauty could come dangerously close to stealing his beastly heart.

Heart of the Fae is a fantasy romance story by Emma Hamm and it's just lovely. I loved this book. I wasn't really sure what to expect, but Hamm blew me away with her story telling. I know this will be a book that I read again several times.

This is a Beauty and the Beast story told through the lens of Irish folklore. Hamm does a fantastic job of interweaving Irish mythology into the story, making it a fresh, new version of Beauty and the Beast. It was a stunning tale that had me laughing, griping the pages in suspense, and crying.

Each character has their own strengths and weaknesses, making them so very compelling. The two main characters are less than perfect, making their struggles that much more relatable. Even the villain had his moments of twisted righteousness. Every person in this story was unique and fantastic.

The two main characters in this story are Sorcha and Eamonn.

Sorcha is a fiery, red-headed midwife. She comes from humble origins but has taught herself a lot of medical knowledge due to her being both a midwife and to help combat the plague. She's smart and takes no shit from man. Yet, all that she's given is shit from men. While she's still very kind and caring, she has developed a thick skin and a very stubborn streak.

Another very important aspect about Sorcha is that she was raised to honor the Fae. While there are Fae in the human world, they don't interact too much. They've become demonized due to *history*. Unlike most humans, Sorcha's mother taught her to treat them with respect and leave gifts for them. She's a little ostracized for this.

Eamonn is Fae. He is son to the Faerie king and queen, the eldest twin, and raised to be a warrior. We learn very quickly that Fionn (his younger twin) betrayed Eamonn, stabbing him in the back. With every cut Eamonn received, crystals would grow out of the wound. Over time, he has turned into a half Fae/half golem creature. He is a handsome man with streaks or opal and crystal distorting his body. For this, he was banished to a magical island that is seen once every seven years. It's the home of banished Fae and Eamonn has become their king. It is a twisted mockery of what should have been rightfully his.

So, as you might imagine, Eamonn isn't the happiest of people. He's secluded and a bit beaten down. Yet, no matter what happened in his past, his first thought is to protect. Like Sorcha, he's stubborn, yet he cares tremendously for the people on this island. Like most Seelie Fae, he feels his emotions on a stronger level. When he loves, he loves hard. When he becomes angry, it's like a storm. Kind of like in Spinal Tap, he too goes to eleven.

There are three things that help set up the story. 1. The human lands are being ravished by the blood beetle plague. Nobody knows how it started, where it came from, or how to cure it. The host is infected with beetles living under their skin and feeding off their blood. It's a bit like the scarab beetles from the 90's version of The Mummy with Brendan Fraser (the best version). 2. Sorcha, the badass heroine of this book, has found a way to extend the life expectancy of a person infected with the blood beetle plague. While she attempts to share her findings with the college of medicine (multiple times), they ignore her because men and patriarchy. They view her as insignificant because she's a woman and has a vagina, but she knows she has something to contribute. She knows she's right. She's going to keep working on a cure for her father. 3. In a world that doesn't believe or trust in the Fae, Sorcha does. After her latest failed attempted at the college of medicine, Sorcha finds herself face to face with a Fae and a deal that could change the tides of the plague. She is to bring back an exiled Fae prince in exchange for the cure to the plague.

These events, the plague, patriarchy, and the Fae, are the catalyst for everything that happens in both Heart of the Fae and Veins of Magic.

Now, this wouldn't be much of a story if Sorcha didn't accept the deal from the Fae. She does. Obviously. She leaves immediately, saying a rushed goodbye to her family, and travels farther than she has ever gone before. She sees things she thought were just old Fae tales and meets intriguing people who help her on her way. Eventually, Sorcha finds herself washed up on this magically hidden island inhabited by banished Fae of all kinds.

And this is where the fun begins!!

Eamonn is (if you haven't figured out) the prince who Sorcha needs to bring back. And it's not going to be easy. He has no reason to go to the human world. He has no ties to it and no reason to trust Sorcha. As much pain as this place causes him, he's come to care for the people who live in this broken castle with him. They are an odd sort of family.

Sorcha enters his life like a hurricane. Yet, for all her initial demands, realizes she needs to find a way to get Eamonn and the other Fae to trust her. She decides to stay until she can convince him to help. Slowly she starts turning things around, winning the trust of the other Fae through her kindness and genuine respect for them. Unwittingly, Sorcha becomes a catalyst for change in the Fae world and Eamonn's life. He realizes he still wants to reclaim his throne and build a different world than what his brother has ruled over.

And things slowly start to thaw between Sorcha and Eamonn.

Their relationship is so gradual. They are a antagonistic towards each other at first (hello enemies to lovers!), going head to head. Sorcha is the first person in a very long time that stands up to and challenges Eamonn. And Eamonn helps Sorcha realize she doesn't have to do everything alone.

They slowly learn to trust each other, becoming tenuous friends first and then lovers. It's a beautiful dance of them being such fools for each other. Sorcha values his quick wit and smart mind and Eamonn is entranced by her compassion and steadfastness. Hamm does a wonderful job of building the romantic tension between them and it's so delicious. I could eat it up. I'm thinking about it and I want to reread the book. It's good things.

It's an amazing romance. Delicious relationship is delicious.

While Heart of the Fae is about these two falling in love, it is also about Sorcha and Eamonn growing, realizing their potential to do something more, and then starting to act upon that.

Now, since this is book one, never doubt that it ends on the cliffiest of cliffhangers. It's noble, it's heart wrenching, is maddening all at the same time! And book two starts with a very different tone than book one. So, buy both books at the same time so you can just start book two immediately.

For any fans of A Court of Thorns and Roses out there, seriously consider picking this series up.

Heart of the Fae is the first in The Otherworld series, with the second, Veins of Magic, finishing up this tale. Book one focuses on Sorcha and Eamonn coming together and falling in love. Book two is about them staying in love and fighting for…so much. You need to read them both to get the HEA. And it is so worth it.

"I am not a woman, but sword and shield. I will carve my own path or I will force others to create it for me."

"Everything is dangerous and one must decide whether to live in fear, or courage."

"I fear that you would ask me to lay the world at your feet." He glanced over his should, blue eyes searing through her calm resolve. "And it would be all too easy to do."

"Right and wrong suggests that there is only black and white. I refute that belief and instead replace it with my own. If I desire a man, I shall take one."

"Mo chroí," She whispered. "You called me your heart."