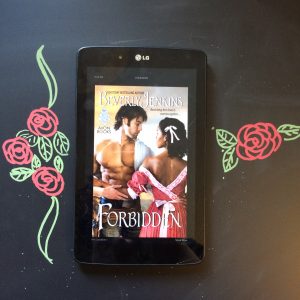 Rhine Fontaine is building the successful life he's always dreamed of—one that depends upon him passing for White. But for the first time in years, he wishes he could step out from behind the façade. The reason: Eddy Carmichael, the young woman he rescued in the desert. Outspoken, defiant, and beautiful, Eddy tempts Rhine in ways that could cost him everything...and the price seems worth paying.

Eddy owes her life to Rhine, but she won't risk her heart for him. As soon as she's saved enough money from her cooking, she'll leave this Nevada town and move to California. No matter how handsome he is, no matter how fiery the heat between them, Rhine will never be hers. Giving in for just one night might quench this longing. Or it might ignite an affair as reckless and irresistible as it is forbidden...

I know Beverly Jenkins just released Tempest. It looks great! It looks wonderful! But my TBR pile is huge and my broke ass needs to wait a little while to read it. So, instead, I'm talking about the first book in this Old West series, Forbidden.

THIS BOOK IS AMAZING!

There is a part of me that just wants to stop there. That's all you need to know about this book. It's amazing. Though, if any of you have read any of Jenkins' previous books, this probably isn't a surprise.

The storytelling is amazing, the characters are fantastic, and the historical research all help bring this book to life! I CAN'T BELIEVE THIS IS ONLY THE SECOND BEVERLY JENKINS BOOK I'VE READ! WHAT IS WRONG WITH ME?

So, let's talk about the characters

There is a depth and richness to Jenkins' characters, both the two protagonists and the supporting cast. Eddy and Rhine were such wonderfully written characters, equally strong in their own convictions. While I normally wax eloquent about the men in romance books (because they make me swoon), I'm going to focus on Eddy instead.

Eddy was such a compelling character. She had a quiet determined, strength and stuck to her convictions. Getting to Virginia City wasn't easy. It was filled with trial after tribulation, but she kept going. She didn't back down or give up. She kept finding a way to make her dream become a reality. Eddy also allowed her self to dream again. I love that she was able to make room in her plans for the surprises life threw at her. She “dusted off” old dreams she never thought would be reality and allowed space for them in her life once again.

But one thing I loved most was Eddy's decisions when it came to Rhine. Even though she felt a pull towards him, she knew a romantic involvement could only go so far. She stuck to her convictions even when he was flirting and charming. Every time she turned him down, I cheered a little. She kept him humble and didn't let his flirtations sway her, especially while he was still involved with Natalie.

The side characters were also wonderful! The whole community of Virginia City was beautiful. However, Sylvia, Vera, Doc, and Jim were a wonderful support for the two lovers. Jim, always there to keep Rhine grounded. Sylvia, giving Eddy a home and a friendship she didn't know before. And Doc and Vera, supporting Eddy and Rhine as friends.

The romance between Eddy and Rhine was so sweet. Like, I might have a toothache now because of their story. From the moment they meet, there is a tension between the two of them. They're attracted, but because of the (seemingly) racial differences, nothing can happen. Plus, Rhine's engaged (though it's more of a business arrangement).

Through it all, Rhine is an incorrigible, endearing flirt who cares deeply for the people of his community. He shows himself to be a man of character and hopes for the future. It's no wonder Eddy falls in love with him. And Rhine doesn't stand a chance against falling for Eddy. Eddy is smart, compassionate, strong, and fierce. No matter how he tries to stay away from her, he keeps being pulled into her.

Theirs is, for obvious reasons, a slow courtship. Their attraction to each other is shared and acknowledged, but not freely acted on. And not acted on till all the cards are on the table. Yet through their day-to-day interactions, they discover more and more reasons why they are falling in love with each other. Why Rhine is willing to turn his life up side down for Eddy. Why Eddy is willing to take a chance on Rhine.

There was a moment in my life when I considered becoming a history major. "There's no money in that!" I said. So, logic prevailed and I switched to social work instead (side-eyes my past self's decision making abilities). I love history. I love knowing about the past and how it's shaped the future. This is part of why I love historical fiction. And I love when authors intertwine their stories with actual historic events.

Beverly Jenkins has blown me away with how she has blended history with her story. There is such a great depth of historical research that adds to the richness of Forbidden. Where most historical romance novels provide a general idea of the time period, Jenkins adds in actual historic places and events. It helps provide context for what is happening, the social/political climate, and the other trials and tribulations the characters are facing (beyond their romantic entanglements).

Since I am fairly new to the romance genre, this is only the second Beverly Jenkins book I've read. I can't wait to get my hands on more (especially some of her pirate books!!). I know I said it before, but it bears repeating: this book was stunning. You absolutely must grab a copy and read it.

The audiobook is equally fantastic. The narrator, Kim Staunton, does a wonderful job of giving voice to the characters. If you don't have time to read the book, grab the audio version to enjoy.

“Will you at least give me a chance to prove myself?” “To what end? A few days ago you were engaged to marry, and now you want me to believe you're genuinely interested in me as something other than a dalliance.” A smiled played around his lips. “You don't plan to make this easy, do you? “Why should I?”

“Men do tend to complicate things.”

“I should go before Sylvie comes home and finds you spread out on the table like dessert.” … “Why would you kiss me on the table?” She whispered. He smiled at the innocence the question held. “Because desire sometimes happens in the oddest places, little queen. You'll see.”

“With yours, I want to put it on your lips and spend the night tasting it…And if that isn't clear enough. I want you, Eddy Carmichael, in a way that has nothing to do with race, but everything to do with me being a man and you being a beautiful woman.”