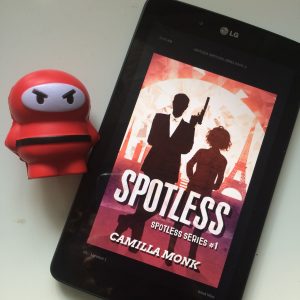 If a handsome, gentleman professional killer with OCD broke into your home looking for a diamond your mother stole, what would you do? If you're Island Chaptal, you mistake him for your roommate's boyfriend, berate him for organizing your tax forms, only to realize your mistake, and arm yourself with a pink vegetable knife. This is the start of Camilla Monk's book Spotless.

Every once in a while, when I dig through the millions of books on Amazon, I stumble across one that is a hidden treasure. Author Camilla Monk and her Spotless series is one such treasure.

In her own words, The Spotless Series are books “with the hitman and the virgin - April and Islet, or something like that. They're written by Camilla Monk, a virtually unknown author who somehow tricked a bunch of people into publishing books about ostriches and killer platypuses.”

And that's probably the most succinct, yet incorrect description of these books ever.

Spotless is indeed a story about a hitman and a virgin. To be more accurate, this is an action packed, espionage love story between a hitman and a, well, she is a virgin, but she's also a brilliant IT engineer. The virgin is Island Chaptal, nerdy IT engineer with a love of random Wikipedia facts and romance novels. The hitman is March (last name redacted), a South African, gentleman professional killer with OCD and a love of ostriches.

In many ways, these books remind me of the TV series, Chuck, but gender-bent. Instead of the nerdy male IT genius-turned-spy, that role falls to Island. Instead of the super competent, female super-spy, that is March. There are other parallels I could draw from book to TV show, but I think it'd be more fun for you to find out (plus, spoilers).

In Spotless, March is searching for the priceless diamond Island's late mother stole. The clues lead him right to Island's very messy door. Together they dodge bullets and right hooks, traveling from New York to Paris to Tokyo, following clue's Island's mother left behind. And while they're getting closer to the diamond, they're getting closer to each other. The most dangerous part of this adventure might be falling in love.

I absolutely loved the characters. Island and March are unique people, with fascinating backgrounds. Island's compassionate, guileless personality is the perfect yin to March's controlling, gentlemanly yang personality. I have a soft spot in my heart for nerdy heroines and Island is such a wonderful example of this trope. I found myself giggling with excitement over the various nerd-references Monk included. And March, despite his profession, is a gentleman. He's not a Bond-like-Casanova. Rather, he lives by a strict moral code and has a deep devotion to the few trustworthy people in his life. Not only that, but the supporting characters are equally as compelling. Monk provides an amazing cast to tell these stories and tie the plot together.

While I love this book, there are some moments in which I need to suspend my disbelief more than usual. There are some things that are so quirky and unrealistic that I need to just laugh it off and move on. For one thing, the big elephant in the room: the fact the story borders on a Stockholm syndrome romance. And two: the story takes place over the course of roughly five days, in which these two fall in love.

These stories are so much fun. Even while they're running away from adversaries or running into danger, Monk brings her own brand of humor and quirk. There is a lightheartedness to these book that most espionage romance books lack (for reasons, I get it). But that just makes this series even better.

If you're looking for a fun, action-packed romance story, I highly recommend grabbing Spotless. After which you should immediately start reading Beating Ruby, Crystal Whisperer, Butterfly in Amber, and Apache Strike Force. The series as a whole is absolutely wonderful. Plus, to really complete the story, get your HEA, and save the world, you need to read the whole series.

If you don't have time to read these books with the holiday season coming up, you can find the series on audible. The narrator, Amy McFadden does an outstanding job bringing the stories and characters to life! I could listen to this on repeat, no problem.

~My knees buckled when I opened my underwear drawer-neatly folded and sorted by fricking color. March. I made damn sure I messed my stuff back into complete chaos while I fished for a bra and a pair of panties. This was a question of honor.

~Perhaps I should mention that there was another important thing I had learned from my encounter with March: the toxicity factor of a gangster is a real number that can be expressed as: (w/f) - g, where f would be how gentle he sounds on a scale of one to ten, w the umber of wrinkles on his shirt, and g the number of black leather gloves. The lower the score, the higher the toxicity factor, -1.9 being the worst possible scenario. A quick mental calculation told me that while March had scored a remarkable -1.25, Creepy-hat was dangerously close to…-1.86.

~“I'm sorry for being a little tense, Island. I suppose I'm not used to having guests in the front seat. My clients usually ride in the trunk, you know.”

~Coming straight from Ukraine, the AZ504 was some huge high-tech bazooka with a digital aim, complete with real-time detection of your targets, and cool app that posted a status updated on your Twitter account, saying “BOOM!” every time you fired it.

~“Of course. Kalahari and I will have a frank discussion, and payback is on its way, but I know her. I know she meant well, and I suppose it won't be the end of the world.” He smiled. “Payback?” “Do you know how long she's bee waiting for that crocodile bag Ilan ordered for her from Hermès?” I shook my head in response. “Seven months. Do you know when it will be completed and delivered?” I shook my head again. “Never. Some 'asshat,' as you would put it, had his PA inform the boutique that the order was canceled.”

Island Chaptal—nerdy IT engineer by day, romance novel junkie by night—just walked into her messy New York apartment to find Mr. Right waiting for her. No, wait…Mr. Clean.

A gentleman professional killer with a bad case of OCD and zero tolerance for unsorted laundry, March isn't there to kill her…yet. He wants the diamond her late mother stole for a sinister criminal organization. Island agrees to help him find it, facing the kind of adversaries who dismember first and ask questions later. Good thing she's got March to show her the ropes. And the guns. And the knives.

The buttoned-up Island is soon having a blast racing from Paris to Tokyo following the clues in her mother's will, and for the first time, she's ready to get close to someone. But falling for a hit man may be the very definition of loving dangerously.…

Spotless marks the beginning of Island and March's ongoing adventures.